Have you ever noticed how dangerous some of the toys we grew up playing with really are?  Sure, there are some that are gentle, plush, and cuddly, but for every one of those there seems to also be one that is sneaky dangerous.  By “sneaky dangerous” I mean that at first glance the toy seems safe and harmless, but if you look close and give it any thought at all, you realize that it’s just an accident waiting to happen.  What toys qualify as “sneaky dangerous”?  I’m glad you asked!

I’ve said it before, but felt it was worth mentioning again.  As uncoordinated as most children are, who thought this would be a good idea?  First you make them feel bad because they can’t draw anything other than snakes, worms, and the letter ‘L’.  Then you make them shake the Etch-A-Sketch violently in order to erase what they just created and so proudly showed off to everyone who would look.  If I had to guess, I would say that this toy is responsible for more self-inflicted black eyes, busted teeth and lips, and bloody noses than nearly any other drawing toy out there.  For a safer alternative, stick with the MagnaDoodle.

I’m not sure who came up with this game, but something about it just doesn’t seem safe.  “Sure kids, bounce that little rubber ball and see how many of these little spiky metal things you can pick up before the ball lands.”  I’m convinced that whoever came up with this idea was just trying to find something that would keep their kids occupied.  It just seems like one of those homemade games where you grab a couple random objects that you have laying around the house and see what kind of a game you can come up with. 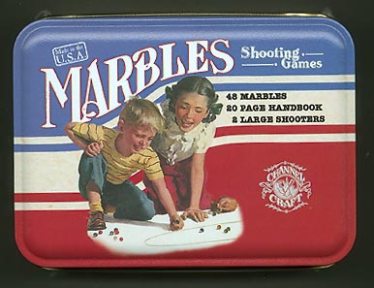 Another one of those games, like Jacks, that was likely invented by a parent somewhere that just wanted some peace and quiet.  How else do you explain giving young kids a bunch of nostril sized pieces of glass?  Not to mention the fact that a lot of kids are not coordinated enough to balance an oversize marble on their index finger and flick it with their thumb without it flying across the room and either breaking something or cracking someone in the skull.

One thing that the yo-yo has going for it that Jacks and Marbles don’t is that it’s on a string and is less likely to end up as a dangerous projectile – until the string unrolls and the little boy playing with it realizes that the faster he swings it around, the farther and faster it will fly.  Not that I would have ever done anything like that. 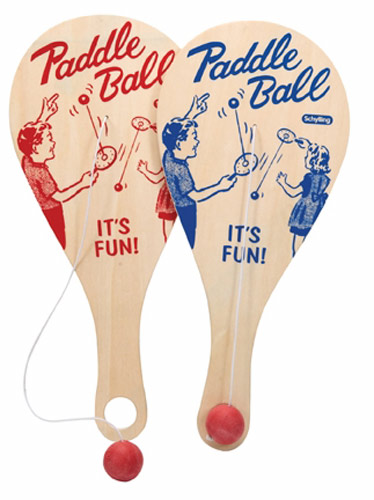 Another stringed toy – this one is guaranteed to put out the eye of either the person playing with it or any person who comes within a three foot radius.  Who this toy is most dangerous for depends on whether the paddler is using the overhand or underhand technique.  Of course if the paddler is like me, he will eventually get frustrated with the fact that he can’t keep it going and just rip the ball off the paddle and see how high he can hit it.  Or the string gets tangled up four minutes into it, rendering the toy useless.